Kneeling on frozen ground, his body half broken from the slog into camp, Dean sucks in two lungfuls of winter Ontario air. He holds it for a moment, then releases a torrent of breath into the steel-sheeted stove nestled in a shallow bed of snow. Strips of birch bark somersault over spruce twigs, both catching sparks from a smouldering newspaper. Yellow flames limp to life from the thawing fibres of the wood. Another breath. The newspaper glows and the bark is lit. 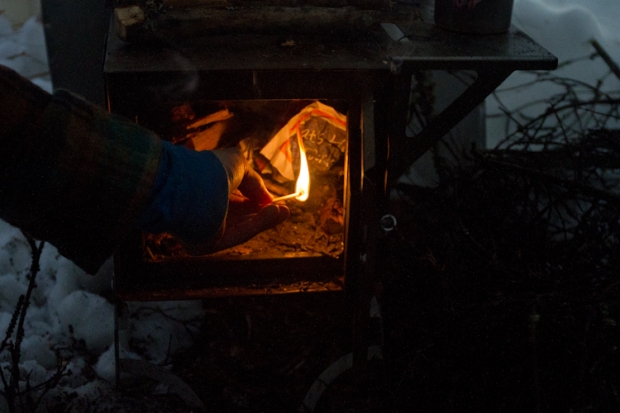 On canoe trips Dean earned the nickname one-match. Invariably a man who answers to the call of one-match is the man you want in charge of the heroic act that weary ancient cave-dwellers desperately discovered: Make the food hot.

A man called one-match in your camp is convenient when it’s eight below zero and you’re about to set up your sleeping bag on top of several feet of Canada’s most abundant natural resource.

Minus eight degrees Celsius may not have the same ring of potential misfortune as Siberia or the Tundra or the Death Zone of Everest, but we’d secretly hoped Algonquin Park would take it easy on us. Besides, cold is cold when you spent last night under a duvet in the city. We were beaten down from the long day on snowshoes and hauling pulks, and now we were laying back in our snow chairs, neither fully awake nor asleep, sipping bourbon from titanium mugs.

It takes a quarter of an hour of tenderness, but the fire kicks to life. Dean grimaces, either because he considers his handiwork imperfect—pyromaniacs can be such perfectionists—or because he is unable to stand on his aching legs. I sit to his left on an uneven rectangle of stamped snow that will become my bunk. Shoulders hunched over knees, I stare straight through this ostensibly enchanted steel box now throbbing with heat. “My god,” I say, half dazed. “There’s a fire inside our tent.” Winter camping will never be the same. 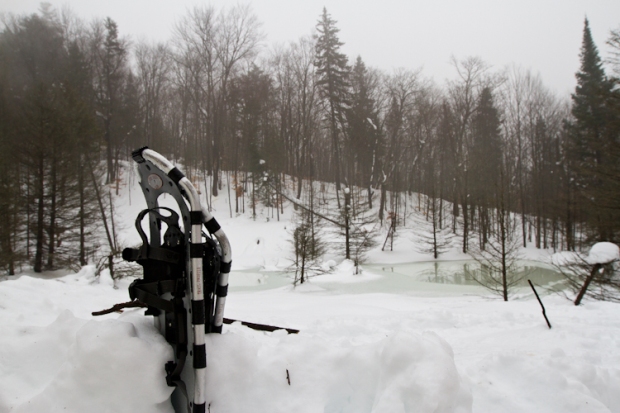 As the frozen season descends on Canada, most of the country’s exquisite wilderness is inaccessible to all but the bravest, hardiest or possibly looniest of outdoor adventurers. But the option of hot-tent winter camping—literally, camping with a wood-burning stove inside your tent—encourages those of us trippers who tend to be a bit more risk averse to blaze trails deeper into the woods and mountains, where we can experience Canada’s tranquil winter landscapes like we may only have imagined previously from heated cottages and the odd yurt.

In winters past I hauled my lightweight nylon tent into one or other of Ontario’s provincial parks to hike, ski or snowshoe. Daytime temperatures of minus twenty were no match for the promise of unbroken acres of pristine terrain, shimmering vistas of ice-entombed lakes, and layers of comfy merino wool and eiderdown. But those same temperatures come nightfall compelled me to reconsider my courage, as I dreamt hopefully in the darkness for a warm fireplace.

After one too many nights shivering myself to sleep inside my bag, numbing myself to the thought that every cold and damp sock, shirt, glove and boot in my possession will likely remain cold and damp throughout the rest of trip, I decided to pursue the hot-tent option. And I convinced one-match Dean that it was more hardy than foolish. 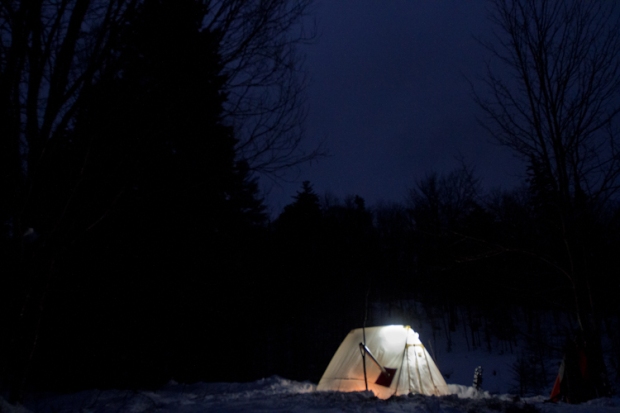 Just off exit 244 of Highway 11, the corridor through Ontario’s Muskoka cottage country, lies the town of Emsdale, where the post office opens lazily around 9:30am in the event that, like us, you overshoot your destination, stare blankly at a confused map app, and need to ask a human for directions. Here in Emsdale, in a tall, copper-roofed visitors centre, a shop called Algonquin Basecamp is currently the only outfitter within eight hours’ drive from Toronto that rents a complete hot-tent winter camping set.

Chris, the thirtyish proprietor with a carpenter’s build, greets us with a handshake and a smile. Somewhere in his mind he’s probably sizing us up, taking stock of the impression we make and how likely he is to have to rescue us from the woods, or worry that he’ll be staring at the char of burnt tent scraps when Dean and I return three days hence. But he doesn’t display any great concern as he leads us toward two sturdy canvas bags each the size of checked luggage. In one, an eight by ten foot A-frame canvas tent; in the other, the longed-for stove.

Cups of strong coffee in hand, Chris gives us a brief tutorial on the set up and a part-by-part accounting for every piece in the set, encouraging us to ask every question we’ve been pondering ourselves over beers for the past month. After which he confesses that he won’t rent these outfits to just anyone who calls. “Sometimes you get people in here that seem not to know what they’re doing,” he says tactfully. Then he recounts a few tales, with no hint of bravado, of people and gear he’s rescued from the woods, or at least stayed up late worrying about.

“It’s a fire inside your tent,” he concludes our how-to session. “So obviously there are constant risks. Before you leave your tent in the morning to go on a hike, the fire’s out. Before you go to sleep at night, it’s out. Out means completely out. Not a single coal lit.”

We shimmy the canvas bags into the back of Dean’s diminutive blue Nissan alongside the rest of our gear, and pull out onto the highway quizzing each other about the lesson of the hot tent. As we exit onto Highway 60—the route that traverses Algonquin’s southern woodlands—we’ve convinced ourselves, one last time, that we can do this. “What about Big Agnes,” I ask, referring to the ultralight nylon summer tent I’ve brought in case we can’t figure out the hot tent in the backcountry. “Leave it in the car,” Dean replies confidently. 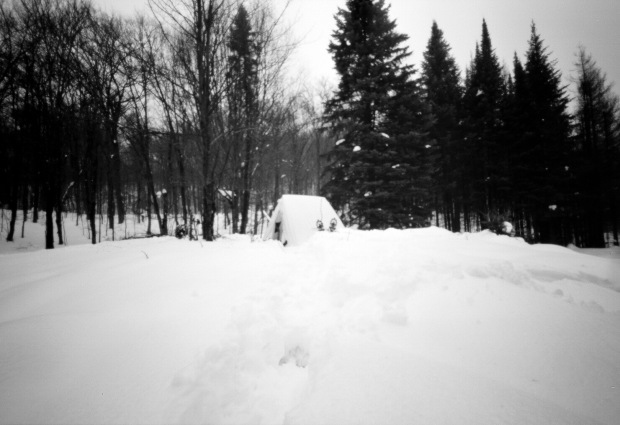 The Western Uplands Trail snakes westward from its junction with Highway 60 and up a series of hills toward kidney bean shaped Maple Leaf Lake, whose shores make popular camping ground for summer canoeists. In other seasons the sloping landscape appears thick with sugar maples, yellow birch and beech trees, this being the most deciduous zone of Alonquin Park. In winter the scene is fully monochromatic: foggy whiteness slit with columns of bare grey tree trunks, snow tufts clinging like babies to their northwesterly sides.

When Algonquin Park was originally designated a protected area in 1893 its framers imagined the “preservation of a primeval forest… a place of health resort” and “a field of experiments in forestry.” If primeval was intended to stand for a place of ethereal beauty and quiet terror in winter, the word was well employed. For more than a century hikers, skiers, trappers and loggers have plied these snowy trails in search of some fortune, whether profit or good health or a satisfying “We did it!” moment. Pulling into the trailhead parking lot we imagine what lies ahead: perhaps a tangled pile of tent parts in a hole in the snow, and two confused campers, having failed at their particular experiment in forestry, sitting beside it in the cold dark.

Dean and I strap ourselves into our long, tangerine pulks, each filled near its tipping point with minus twenty degree down sleeping bags, wool long underwear, flannel shirts and many other layers of warmth. We’ve twelve pounds of photography gear squeezed into padded nooks of our camera bags, plus a full kitchen of two lightweight camp stoves, forty-six ounces of white gas, pots and pans and enough salami, cheese, stew, chocolate and chicken noodle soup to feed a famished Boy Scout troop.

Evidently we believe three days’ caloric consumption in winter is equivalent to a week’s in summer. “Prediction,” I announced the first evening as I rummaged through a red waterproof food bag for an appetizer while Dean’s beef stew simmered on the stove. “We won’t be carrying any food out of here on Sunday.”

The three-kilometre snowshoe trek uphill from the trailhead transforms our hamstrings into piano wire. Over a small rise in the landscape the trail plunges toward a babbly stream, heard but not seen, and halfway down and about twenty meters to our right is a flat clearing, evident of a snow-covered pond. We drag our outfits no farther than its far shore, where a patch of soft snow—treeless except for a great white fir—allows us to declare camp.

Conjuring enthusiasm, I pant, “This looks like our spot.” Dean huffs out an agreement. “Grab the shovel. Time to make a home.” 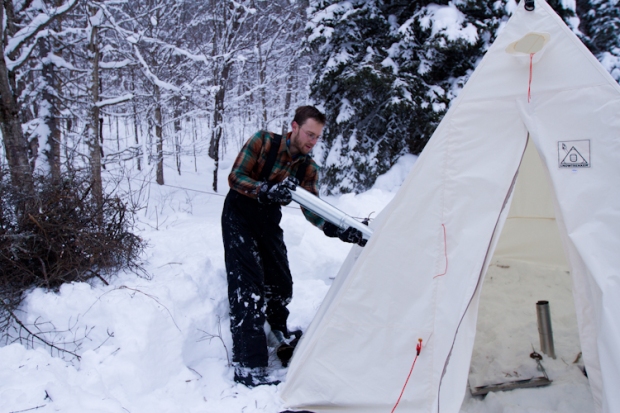 My fingers grasp a flap on one corner of the tent and curl it, as I grunt, around the upright aluminium tent pole. The canvas feels heavy and cumbersome in the cold. We inch it over the A frame—a pair of two-meter-tall triangles leaning inward and separated by an equally long centre pole—and strap down the other three corners. Tying off a few guy lines on the fir tree, we proclaim that at least we’ll have a roof tonight. The floor is eighty square feet of snow.

The afternoon wanes. A cool fog has settled over the landscape. We pull out the stove: a steel box, nineteen inches long, twelve high, with two flip-down leg stands and a door at one end; a set of telescoping stove pipes plus an elbow; and a cache of steel wire and cutters for improvisations. The whole kit weighs about seventeen pounds. One side of the tent wall contains a six-inch hole, lined with Kevlar, for the chimney. Once the stove is assembled, we erect a bipod outside to hold the weight of the pipe. Then we march off into the woods to collect fallen limbs for fuel. One-match Dean feels a sense of duty as he grinds his saw into a branch of maple: if he’s going to haul a stove into the winter backcountry, he’ll at least give it the honour of a blazing fire. 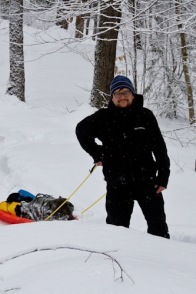 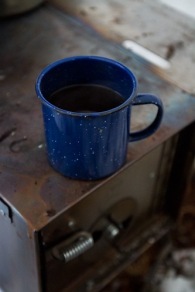 As a cloudy darkness envelops the campsite and the day’s fresh powder hardens on the ground, the stove is turning our tent into a sauna. Damp kindling—and the constant stoking required to coax the fire to a temperature hot enough to ignite hard wood—produces a steady plume of smoke inside the tent. With tears in my eyes I fumble for the tent flaps while Dean doubles over coughing. It feels a little humiliating, getting smoked out of our own tent. After a few breaths of fresh air I say something sheepish to Dean along the lines of, “I’m glad the bears are hibernating, and can’t witness the two of us trying to work a stove in the woods.”

After airing out the tent, we dry our wood on the stovetop next to the tea, and eventually, a crisp, hot fire is crackling inside the stove. Dean takes a pull from his flask and wonders aloud how we won’t last another half hour awake. It’s barely 5p.m. I lean into the snow bank I’ve crafted for a bed frame and think about absolutely nothing. The smell of stew lingers on the warm air. 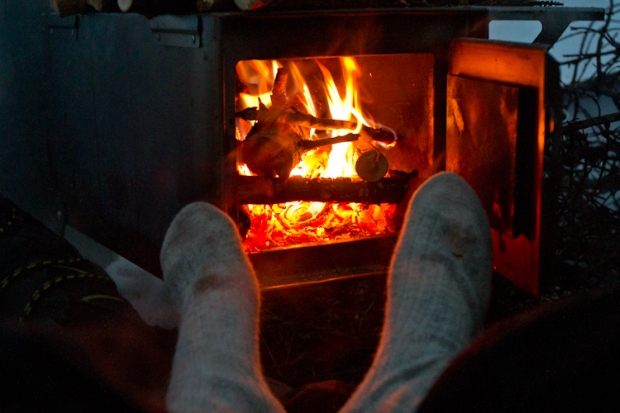 All photos by Dean “One-Match” Bradley