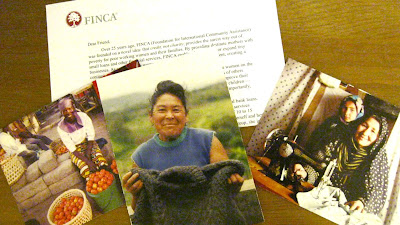 Last week I received an envelope in the mail from the Foundation for International Community Assistance, or FINCA, which consisted of three photographs of women presenting a form of livelihood to the camera, and a letter from FINCA president and CEO Rupert W. Scofield informing me about “micro-entrepreneurship,” “village banks,” and how my “donation of $50 or more” can empower poor women like “Dominga” and “Robinah” (not pictured), whose brief tales of former woe and current hope are offered up as proof of FINCA’s commitment and success.

As an experienced communications manager and advisor in the non-profit/NGO sector, I’m very curious about these kinds of promotions. When I see something like this, there are 5 things that immediately come to mind:

1) Who are the women (and the child) in the photographs?
2) Who is the photographer(s)?
3) Under what circumstances were the photographs taken?
4) Does the letter inform me of how my donation is managed/governed?
5) Am I encouraged to seek out more information before becoming a donor?

So how did FINCA do with respect to these five benchmarks?

1) The photographs are actually cards, and inside each is the full name, home town (or in one case only home country) and brief success story of each woman. The child’s name and relationship to the woman in that photograph are not mentioned.

2) The photographers are not named anywhere. I believe the photographer should always be credited (even though this is not standard practice with NGOs) in campaigns such as this, both for credit/copyright of an original creation (based on my experience these photos were probably taken by a frontline fieldworker who has no idea about the copyright he/she holds), and for accountability, such as #3 below.

3) The circumstances are very important: Did the subjects assent to their photograph being taken and their image being used for direct marketing? How did they give their assent and what assurances are there that they understood the concept of what FINCA was doing with their image. There is no mention of this anywhere in FINCA’s information. Not that this is surprising or that FINCA is alone in neglecting this.

There is no mention of the child’s assent to participate, which is a guideline of the Convention on the Rights of the Child (CRC) and standard Child Rights policies that most international NGOs keep. Not naming the child (a child’s right to privacy) is a good practice endorsed by the framework of the CRC, yet this is undermined by using the image of the child without her assent.

It’s worth noting that among NGOs the standard practice is to blanket themselves in Child Rights and other policies and therefore not have to invoke them at every turn. My point is that in the case of fundraising and marketing by anNGO, transparency must reach another level, and FINCA fails.

4) There is no mention of FINCA’s fiscal accountability in the letter, save for a mention in Mr. Scofield’s postscript that “93 cents of every dollar donated to FINCA directly supports client services.” This is an impressive but wholly misleading figure. If we are to infer from this marketable statistic that 93% of donations (or 93% of all FINCA’s income) are spent servicing the grassroots financial-aid programs for the beneficiaries (the Domingas and Robinahs) and only 7% on administrative and personnel costs of FINCA and its partner NGOs in the field — well, if true that would be remarkable.

FINCA does, as it should, publish its financial statements for the public to scrutinize. Nowhere within those pages could the average person interpret the “93 cents” remark. FINCA is a $500-million non-profit charitable organization that is also a bank with a corporate business model. In 2010 it collected $7m in grants, $14m in donations, and $163m in gross interest earned. It spent $81m on personnel and $56m on operating expenses (also spending on taxes, interest and foreign exchange), and curiously (for a non-profit) reported a $10-million profit. Which 93 cents of which of those dollars went to which client services?

If 93% of the $14 million in donations alone goes to “client services,” my response is: Why not 100%? Donations seem to be such a small part of FINCA’s total budget, and in fact come close to matching reported profit. Did FINCAthink that 93% was a more believable (e.g. marketable) number than 100%?

Naturally nowhere in his letter (or in FINCA’s financial statements) does Robert W. Scofield mention that his annual salary is $317,281, or more than double the median CEO salary in the non-profit industry. The same source — the Better Business Bureau — that reported his salary also reported that FINCA’s financial statements do not meet the standards of the Generally Accepted Accounting Principles (GAAP); FINCA like many NGOs holds itself to International Financial Reporting Standards (IFRS) instead.

5) This, of course, is a trick question. It’s antithetical to a marketing campaign to invite its audience to seek critical counsel before donating. Even if I were FINCA’s communications director I’d be hard pressed slip such a gilded layer of transparency past a marketing team besotted with donor-friendly photographs of smiling foreign women. Again, my point is based on holding NGOs, charities and non-profits to a higher standard than for-profit, consumer-based organizations.

This post in no way has been devised to malign FINCA; I am not accusing them of any duplicity or mismanagement, nor am I aware of their reputation amongst their donors, partners and beneficiaries. FINCAsent this unsolicited letter to me. And this is my response. I’m simply posing as a very stubborn consumer. And no, they will not be getting my $50. Not today.